I went to the Polo grounds this afternoon. In fact, the polo grounds are a block and a half away from where I'm living. It's a huge complex ... hosted the world championships last fall ..... teams came from all over. 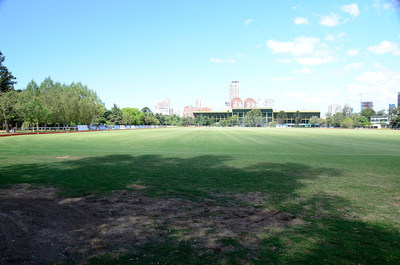 The polo grounds around the block from my house

I knew nothing about polo until this week. I did know that Prince Phillip played it at one time, as did Prince Charles. I'm told that neither of them were really any good at it. I was not aware that, of the worlds best players, the top 7 come from Argentina. I suppose they can be critical if they want to ... experts usually are. 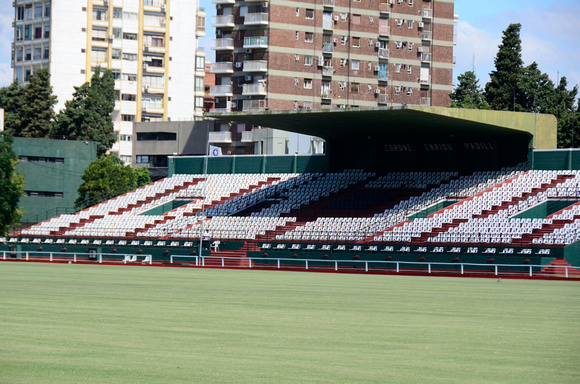 Huge stands .. but unless the event is a "special" local clubs don't get much of an audience

For those who might wish to know, Polo is a team sport. Four players a side, they play 6 "chukkers" of 7 minutes each. There is a short break between each chukker and a slightly longer one after the third (mid game). The object of the exercise is for each team to use their mallets to drive a white plastic ball (originally made of wood - but the wooden ones split up all the time) between the goal markers of the opposing team. Highest score at the end of the game wins.

There is a finally honed set of rules that also seem simple in their explanation because there are so few of them ... but they are hard to follow. For example, a rider can hit the ball forward or back and the line of travel of the ball becomes what you might call the line of pursuit. The player hitting or pursuing the ball must keep the line on his right and no other player can ride over that line in front of the player pursuing that ball. A following player can ride off the pursuing player by having his horse push the pursuing rider to the side (something like boarding in hockey) but can only approach the pursuing rider at less than a 45 degree angle. 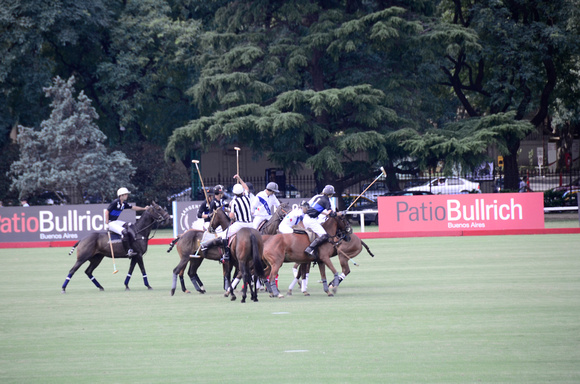 With all 8 riders and horses milling about the field, and pushing and shoving each other around, you can imagine how hard it is to actually play within the rules, ... and the rule above is only one of a number of rules that they have to know. 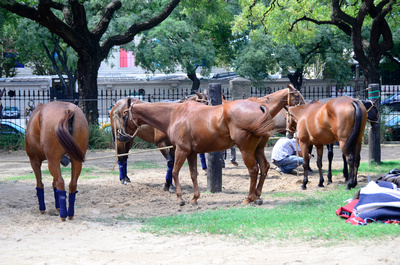 The horses are tied up wherever the stockmen figure they can get the best shade for the mounts.

Each rider has a menagerie of horses, I counted 8 for one rider this afternoon. You can tell which horse belongs to which rider from the colour of the leg wraps (protective wrapping around the lower leg area).Each rider has his own colour for each match. These horses have to be the 100 meter dash experts of the horse world. They start and stop on a dime, rush forward at an incredible speed then come to a grinding halt in less than 15 feet. They pivot, spiral, back up, move directly sideways, all by the touch of the riders knees and heels. It's amazing to watch. But in the afternoon heat (it was low 30's today) it's not long before the ponies get overheated or winded.

As soon as a rider senses his horse is tiring he immediately heads for the sidelines (no time is called....play continues) and he will do a quick swap with a groom holding his "stand-by" horse. The remount is already exercised and warmed up to go into the game so there is a minimum of lost time for the player. A player will go through all of his horses in 3-4 chukkers and needs to ride with the knowledge that he has to preserve the horses for the last half of the game. It's all very technical ... and watching the grooms and trainers prep each horse in turn and have it ready for when the player needs it is watching poetry in motion. It is a finely organized ballet, quite similar to the pit crews in a formula 1 race, only these guys do it with horse flesh. 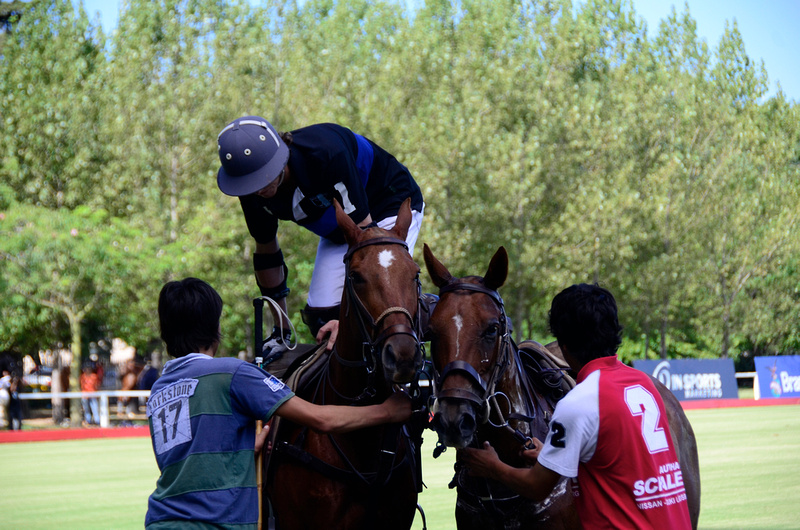 All these horses are raised and living on "estancias" out in the pampas region of Argentina. Bred specifically for polo, they are trained by professional trainers and as their training progresses, so does their value. It takes nearly 10 years to "finish" a horse, that is .. have the horse fully schooled in all the things his rider needs him to do to play the game with any hope of showing well. 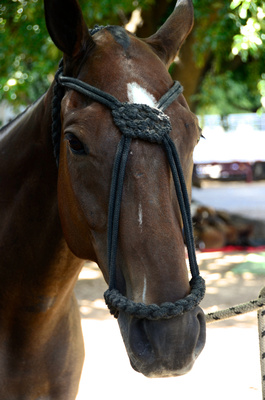 As you can well imagine, this sport is expensive. I play golf .. new clubs can be pricey. I used to ski ... new skis can be pricey, but the expense for "doing polo" requires an entirely different set of financial numbers. A separate income based on owning a few oil wells would probably help. Just the salaries for grooms, stock men, trainers, drivers for the horse trailers ... the list goes on .. is immense. Add to that the cost of stables, tack, farm and grazing land, run-ins and corrals, etc .etc. Well ... it adds up.The afternoon I spent at the polo grounds was among people who have more money than god !! And they looked the part. There is a lot of money here ... old money ... from families that have been part of the power structure for generations. And they are the ones who, for the most part, support the sport here in Argentina. There are quite a lot of very recognizable sponsors as well, so money for the sport doesn't seem to be a problem.

It's in English and gives a good description of what's what with the game.