Every year, at the Farm and Ranch museum in Las Cruces NM, they have a weekend event called "Cowboy Days".

We should remember that this part of the United States was the last vestige of the true "wild west" that we've all read about and seen in the movies. The history of this area goes back to the earliest of human habitation in North America and has remained a solidly remote area of the U.S. right through until the early 1900's.

The weekend of the cowboy reveres the times between the Spanish incursion from Mexico and the assimilation of the area and peoples by the U.S.. It does very well to explain what the local folks went through just to survive in this relatively hostile environment. One of the highlights (in my opinion) is the "Parade of Breeds". It is a lecture given by a long time rancher from the Mesilla Valley (my area) who has been in the ranching business for over three generations. We have been to every one of his lectures over the past three years and he is a font of information. He talks to the audience and answers questions at any time.

He does the lectures from horse back, in a riding pen on the museum grounds. The cattle he "wheels in" are breeding stock for show and most had their beginning in the agricultural area of the New Mexico State University on the outskirts of town. Prime examples of the breeds of beef cattle over the last 200 years. I have never failed to learn something new every time I hear him speak.

Back in the day, when the Spanish were the prime explorers of this area they imported the Corrientes breed from southern Spain. The heat of the summer in southern New Mexico is similar to that in Spain and the Corrientes are the "survivor supreme" of cattle of that era. The saying is "they can survive quite well living on a parking lot". 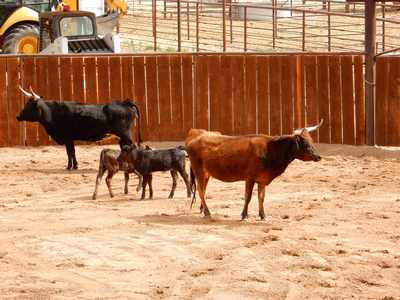 They are not the largest cattle you've seen I'm sure, and the calves are not that big when they are born either. However the mothers have the reputation of being the most protective of any of the cattle breeds and in the high desert environment of New Mexico they fend off the mountain lions and other predators with great gusto.

At the Ranch everyone comes to see the Texas Longhorns. These guys are the ones that the movies made famous as being the main players in all the westerns that had cattle drives from Texas up to the railhead in Santa Fe and points north. I am told that the horns weren't something the ranchers bred into the cattle...it was simply a freak of genetics that resulted in the longer horns. Surprisingly it is not a definitive trait, aside from being large. No two heads have horns that are the same. Every cow (cow or bull) has some differentiation in the horns. In the photos below you can see one of the Longhorns with a horn that seems quite misshapen and out of whack. That's not a rarity. The longhorns are larger cattle than the Corrientes and don't move nearly so quickly (due to size). Still, they are impressive. 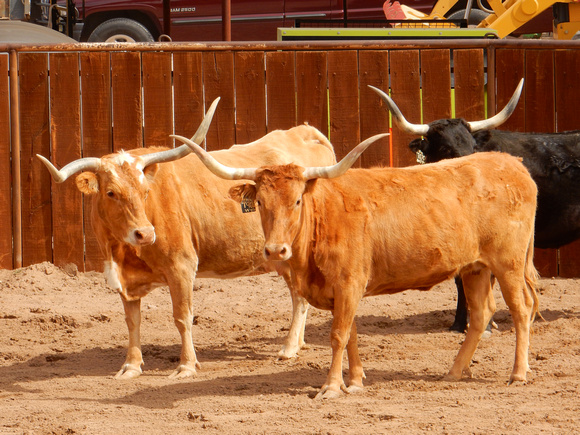 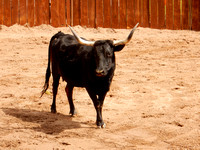 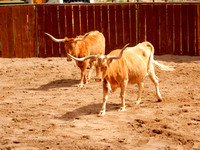 Interesting the colour variations as well as the wonky horn on the cow on the right.

During the late 1800's a lot of land was given over to European and American settlers. The intention was to run agricultural operations in the south. The newcomers did not really appreciate the ruggedness and severity of the local climate. It is "high desert" with everything that the title denotes. Some years are pure drought, some years have a little rain. It is cold at night in the winter and blisteringly hot at times during the summer. a few decades after the influx of "easterners" taking advantage of free land, they became aware that running a farm was not in the books. Most of them couldn't make a living and simply gave up the land and moved back up north. The land reverted to the Bureau of Land Management and is presently (in many areas) used as grazing land by ranchers.

Around about this time (late 1800's - early 1900's) the train became the major method of moving cattle from the ranch to the processors. The ranchers were also looking for breeds of cattle that were larger and could provide more meat per animal than before. Not having to drive the herds en mass to the major centres was perfect for the breed of cattle the ranchers were bringing in - Herefords. 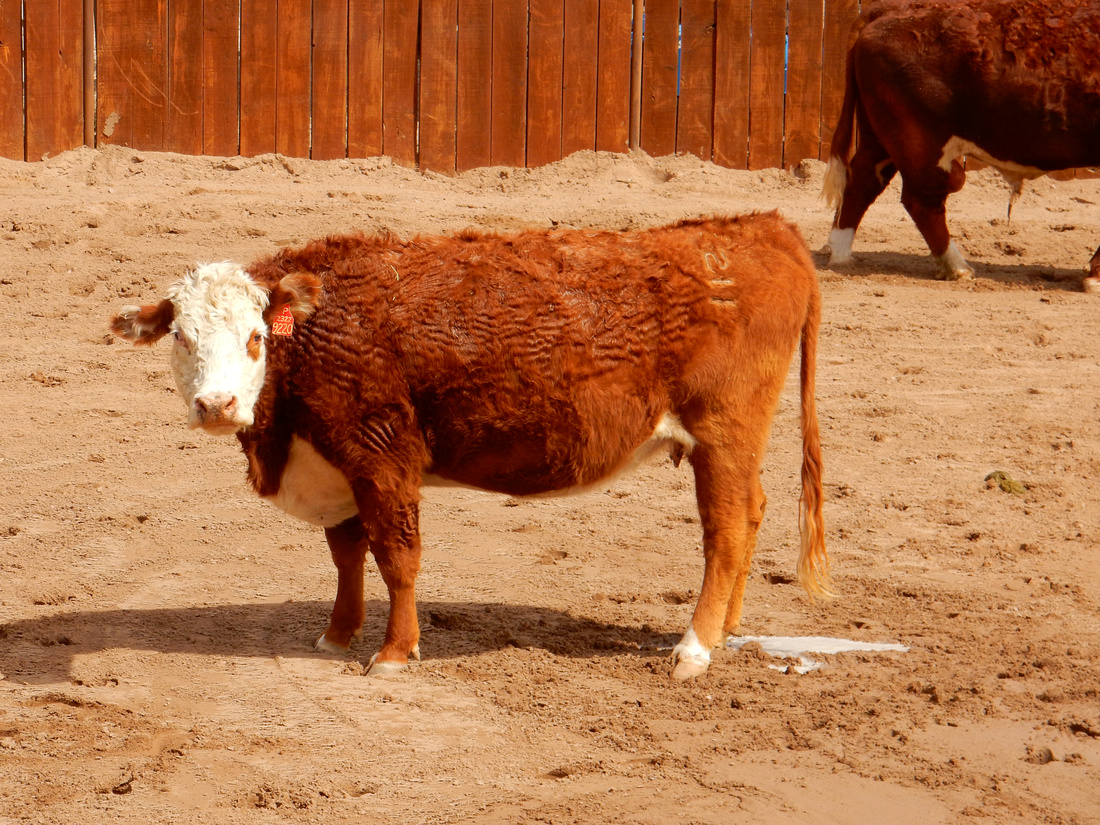 As you can see, they are larger than the previous breeds and pack on a lot of weight fairly quickly. Unfortunately, they aren't as rugged an animal as the Corrientes or Longhorns and had some major issues with living in the high desert environment. They are a fairly docile breed but can be nasty when provoked. 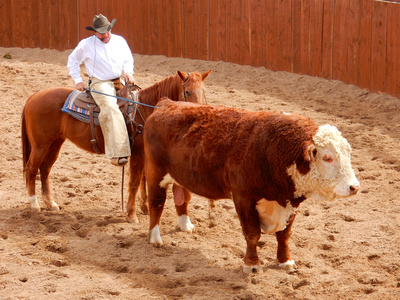 This big fellow is the breeding male and will live out his life at the ranch museum enjoying the company of his "ladies". He has sired a number of really great calves and the University folks take really good care of him. He's a prime specimen of the breed.

Ranching in the South West has always been a risky venture. I was told that the chances of a young fellow going into the ranching business nowadays is zero to none. The cost of land is too high, the cost of the herd exorbitant and unless you inherit from your family, there is no hope of having your own spread. The weather here is not cooperative at all. You get some years with good rain and the range produces everything the cattle need to live. Other years there is a drought and nothing grows, including the cattle. There have been many times in the last 75 years where ranchers have had to sell off their herd because they couldn't feed them and the water supply had dried up. They do get some subsidies from the gov't but just enough to tide them over so they can use what they got from selling last year to restart a new herd this year..weather permitting.

And the amount of land required is vast. In the north they talk of number of head per acre, down here they talk of number of sections for each cow. We belong to the "High Desert Hikers" group and go hiking every now and then in the hills around our valley. It is normal to come over a hill and see one or two cows with their calves chowing down on the local grasses. Only one or two mind you...the next ones that you see could be two miles away. They are spread over vast amounts of land simply because the high desert here doesn't feed very many cattle in one area.

There is always the effort to increase the weight of the beef cattle produced and to make them sturdier for living in the tough conditions here. The ranchers brought in Angus cattle to try and make the switch to a higher profit margin.  And so they brought in Angus. 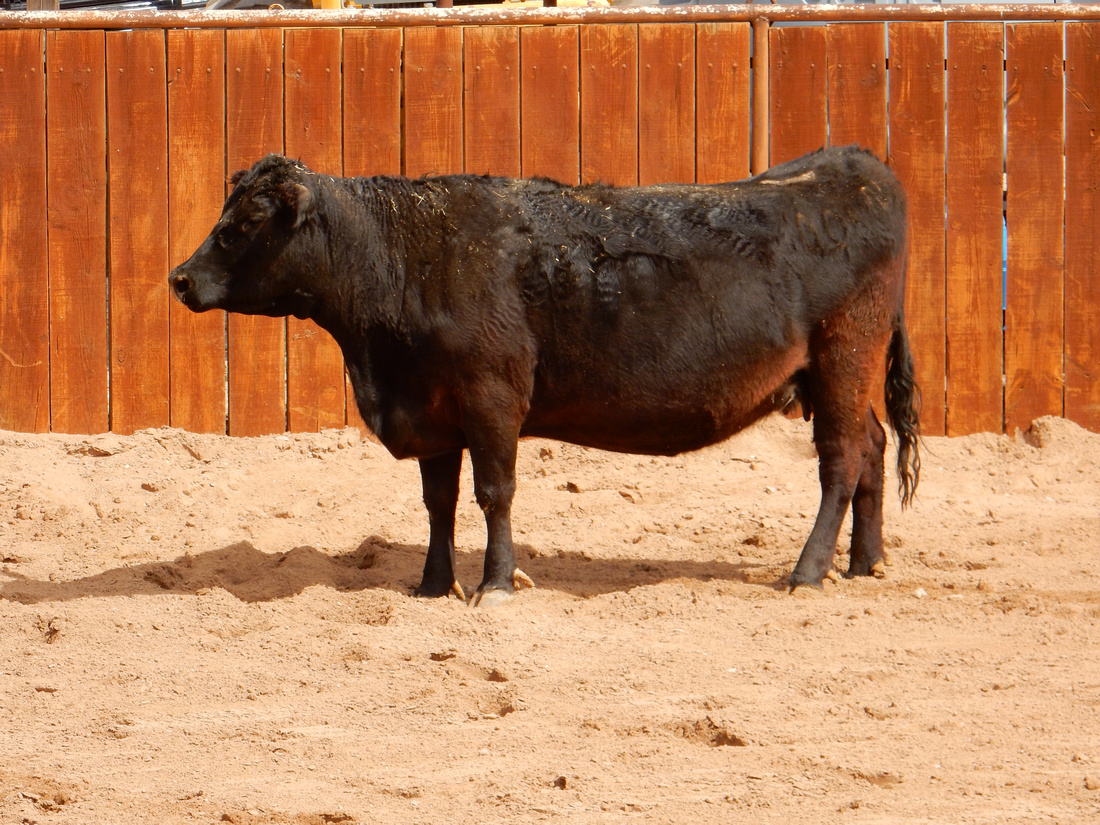 As you can tell, they are big brutes and can pack on the weight. They reproduce well to boot. Lots of calves make the difference and keep the herd at full strength.

However, they are used to cooler weather and northern climates, and find the summer heat to be a bit of a problem. To solve this dilemma they imported the Brahma from India. These guys are used to the heat and sparse grazing. 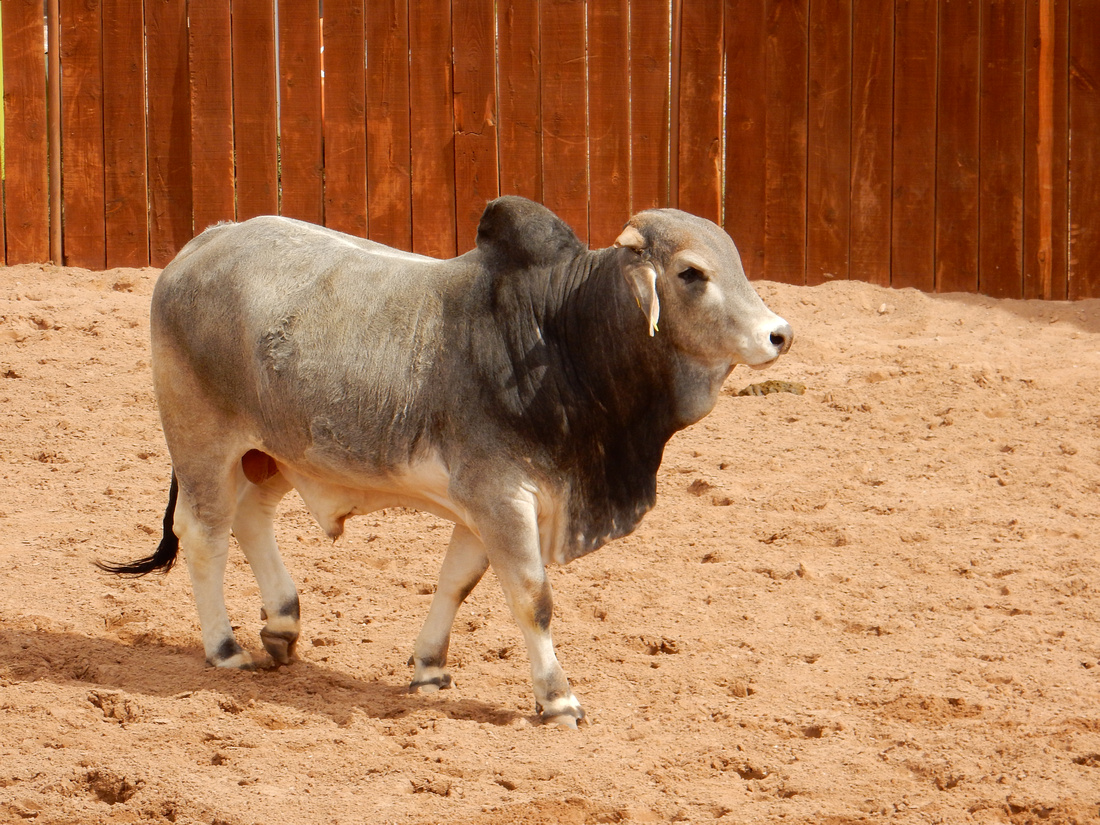 This breed worked very well and after cross breeding with the Angus produce the Brangus. Good solid meat producers. Fairly lean meat, reproduce well and live quite well in the southern western high desert. Good value for the money invested. 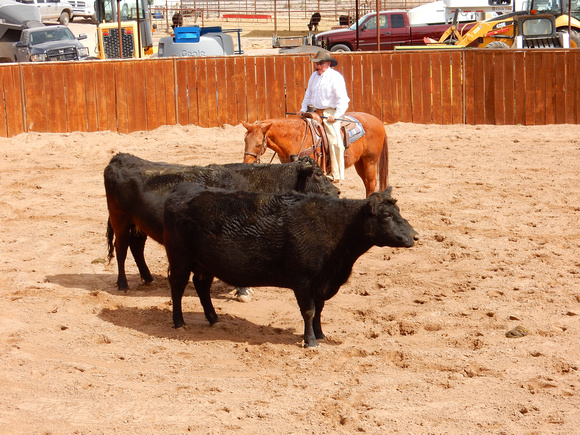 Here is the end result...the Brangus. There is still the effort to improve on the ranching methods and production of meats for the general public, and hopefully there will come a day when the emphasis on having good food will not entail such a heavy dependence on meat production.....however, in the mean time ?

There is a move afoot at the moment to thin out (....less fat in the meat...) the production line. The object is to produce good meat with reduced fat content and something that will be better for you. The latest trend is to cross breed Charolais with the Brangus. It'll be interesting to see how that turns out. 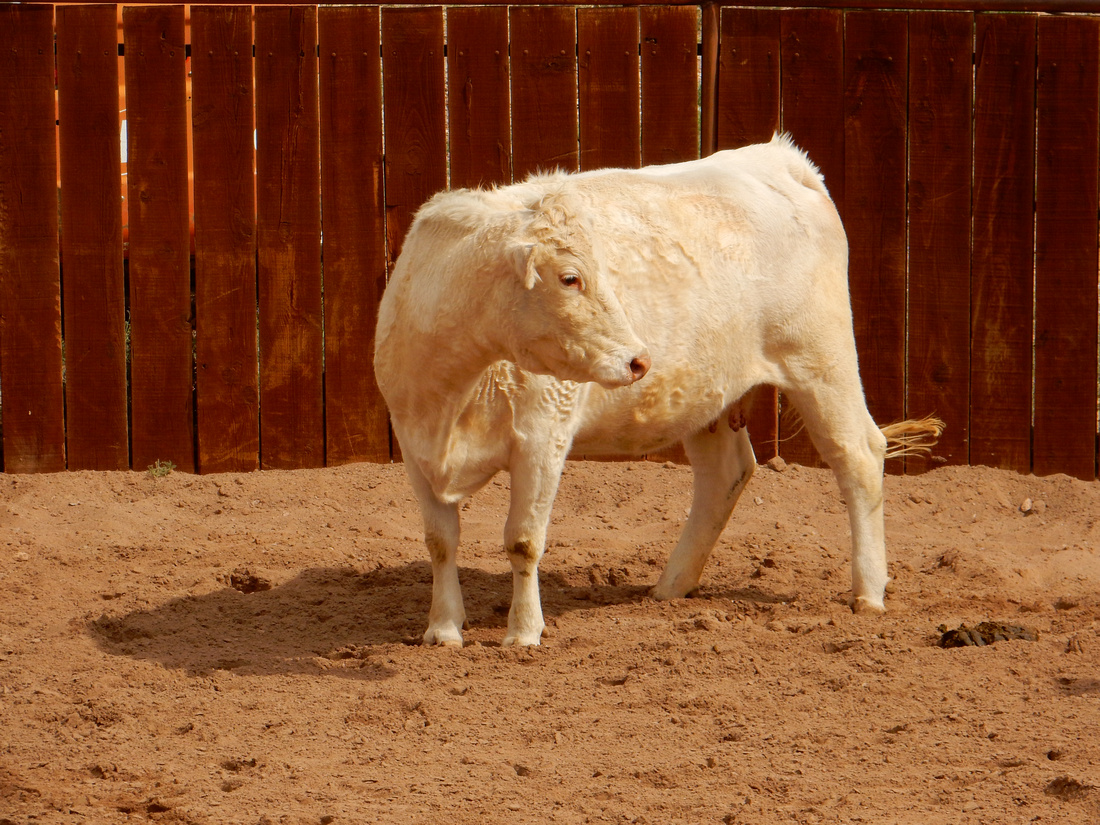 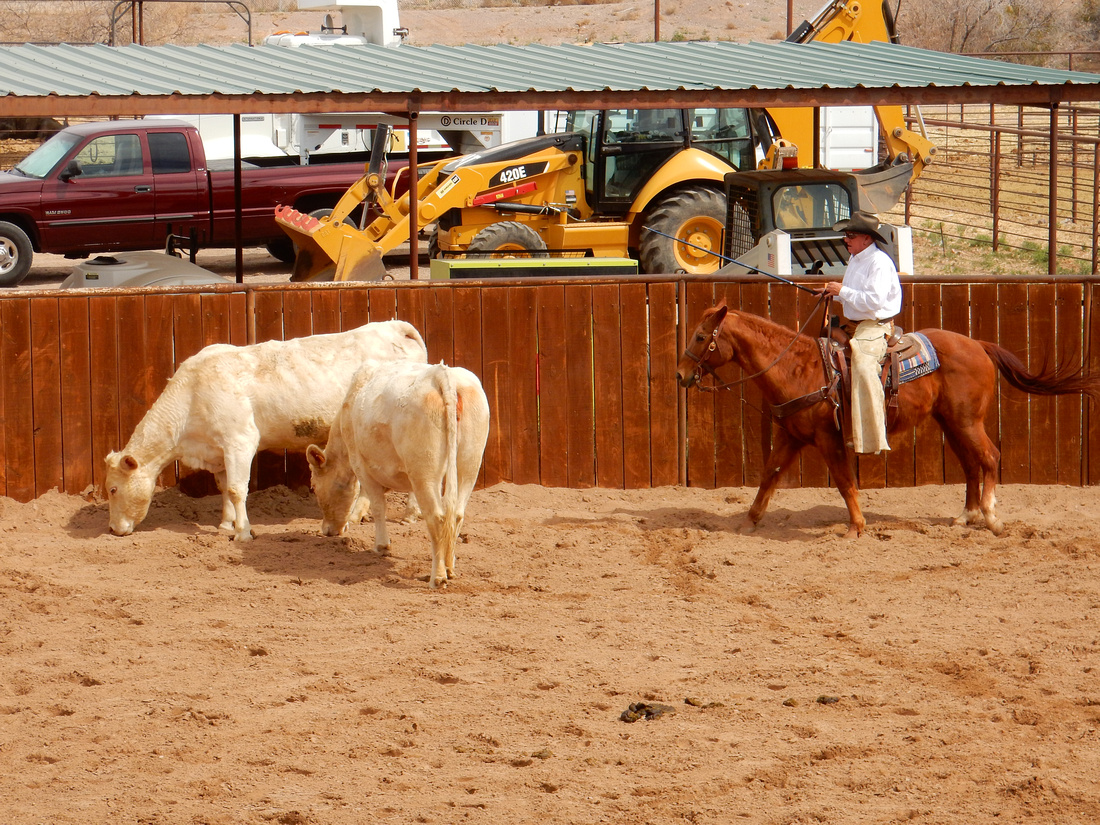 The rancher that does these lectures makes no bones about it..he can't eat beef...his system doesn't process cholesterol and he would have a heart condition pretty quick if he ate beef. We have chosen to forego red meats ourselves, simply because we aren't really comfortable with the processing methodology in use these days. But there are millions of people all over the world that eat beef and there is a thriving business in meat production in both the U.S. and Canada.