We are into our second year here in Bs.As. and are using the local public transport service frequently. I am very pleased to tell you it is something to be experienced. In Argentina "collectivos" are actually the big city buses and how the system operates needs some explaining .. but let's start with the taxis first.

In Bs. As. there are more taxis than there are people. The city is renown for the black and yellow taxis that prowl the streets at all times of the day and night. The "radio taxis" are the certified cars and charge the correct fare on the meter. The ones that aren't "radio" are not certified so can charge different rates .. usually a lot more.

You hold up your arm and flag one down when you want one. The driver will flick his lights on and off to indicate he saw you and then pull over and stop. They have a lighted sign on the front window to tell you if they already have a fare. You tell him where you want to go, he goes there, you pay and get out. It's just that easy. Best part ..... it is cheap, cheap, cheap. 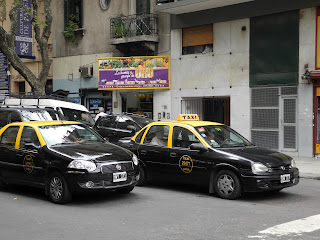 You can drive for half an hour for about $6 - $8. So far so good. The only thing is you have to get used to driving with a Formula-1 racer. These guys drive at breakneck speed, change lanes without signalling, dart into side-streets and merge at 60 mph into main thoroughfares, all without looking for any conflicting traffic. Amazing to me that more people aren't killed by these guys while they are standing on a street corner.
And they fight with the buses for the best pick-up points on every street. The bus drivers hate them, but surprisingly enough, they seem to have this "code" worked out with horn beeps that lets the other guys know who's going where and when. They actually signal each other to let the buses go first or taxis go first, and in that way seem to stay out of each others way fairly well. 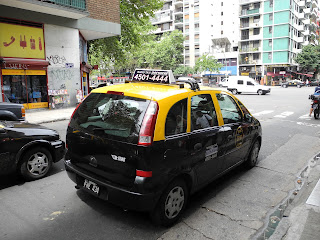 There is another type of taxi that is slightly larger than the small originals. They are called "remise" and charge the same fare when you flag them down .. but they can take larger bags, more trunk space, etc. They usually use them out at the airports or main bus terminals and train stations for obvious reasons.

There must be 120 bus companies in Buenos Aires, or so it seems. These companies bid for routes within the city and outskirts. The winning companies are expected to service these routes as often as possible without losing money. If they can't do it, the route will go to the next bidder. Each bus company has it's own special colour scheme for its buses and some are quite pleasant to look at. Some are totally otherwise, especially on the inside (dirty, poorly maintained, etc). You can never tell which bus line you will get at any given stop because the city allows for 2 or 3 different companies to operate on the same routes. Competition runs rampant. 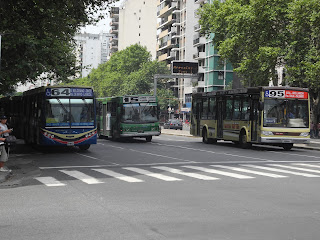 Although these different bus lines do compete for passengers, the bus stops are staggered along the way so that no one company gets the lion share of the business. And the passengers seem to know which bus line has the good buses (the air conditioned buses) and of course that's the bus stop they go to. At some point (usually toward the city outskirts) the routes the different buses follow will vary, so it basically comes down to how far you want to go and to what part of the city you're travelling.

As an interesting aside, the bus lines seem to send out two buses on the same route at the same time. The drivers play hop/skip, and each takes a turn at going first and picking up at the next stop. They swap lead enroute to the next pick-up point and in this way, as one gets full, the other bus picks up at the next stop. 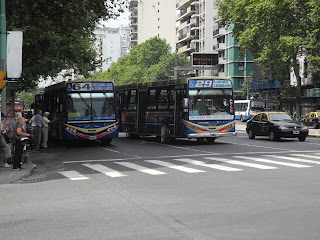 When the lights turn red, all the traffic (and there is a lot of it) will cozy on up to the crosswalk lines as if they are waiting for the starters gun. The traffic lights in B.A. turn yellow before they go red like at home .. but also turn yellow before they go green, as a warning to pedestrians. The drivers know this ... so it's "gentleman start your engines". Once the lights go green, the race is one and any one not on the sidewalk by that moment better be running .. these buses wait for no man. Cars that get in the way also run the risk of being somewhat insulted by the horns and whistles of these super large racing machines. 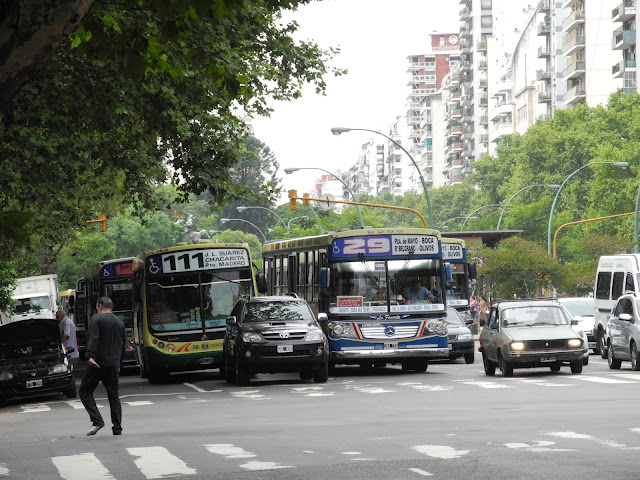 The buses are so many and so frequent that waiting for one is never a problem ... maybe 5 minutes at most. As you can tell, jockeying for position to get to the curb for the next stop can be a problem but these drivers seem to manage it quite well. They move in and out of traffic, block off other vehicles, dive for the bus stops at breakneck speeds, slam on the brakes or gun the engine to pull away from the curb .. it's quite the experience. The key to success as a passenger .... sitting or standing .. hold on tight and enjoy the ride.

The buses are not limited to the main roads, even the larger ones drift through the side streets with what seems to be an acrobatic capability. I have come to respect the drivers of these machines to a fairly high degree. They manoeuvre these ten ton behemoths with such skill and dexterity and all the while carry on conversations on their cell phones, listen to walk-man music or solve the nations problems with any passenger willing to engage them in conversation. 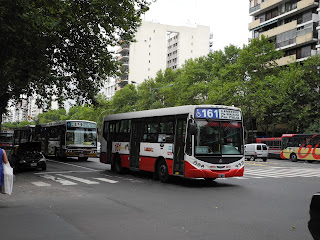