Visitors 0
Modified 19-Apr-19
Created 15-Sep-09
3 photos
The Hôtel de Ville, Paris's city hall, is the center of political Paris. Like Paris, it has been through some turbulent times. Until 1141 when water merchants created the port de Grève to relieve Paris's busy port, the site was merely a shingle beach. The square near the harbour was known as the 'place de Grève'.

In 1246 the first municipality was created when the Parisian trade guilds elected aldermen as representatives towards the King. There was no municipal building until 1357 when one of the Aldermen, a water merchant, bought a house near the place de Grève. The two-storied building featured two towers and arcade. Known as the House of Pillars, it served as the predecessor of the city hall. Between 1553 and 1628 a new, larger Hôtel de Ville was constructed in the new Renaissance style.

A revolutionary Commune, which had occupied the Hôtel de Ville for months, set the building on fire in May 1771, destroying the valuable city archives. Shortly after the Commune was defeated by royalist forces, the city government held a competition for a new city hall. The architects Théodore Ballu and Edouard Deperthes won this competition with their proposition to reconstruct the Hôtel de Ville in its original style. Funded by a national subscription the construction started in 1873. Nine years later, the new Hôtel de Ville was officially inaugurated.

The building is decorated with 108 statues, representing famous Parisians. 30 Other statues represent French cities. The clock at the central tower is adorned with several feminine sculptures representing the Seine River, the city of Paris, 'Work' and 'Education'.

The interior of the city hall is decorated in a pompous IIIe Empire style. Noteworthy are the large staircase, the long Salle des Fêtes (ballroom), the painted ceilings and walls, the stained glass windows and the numerous chandeliers.

From 1310 on, the Place de Grève was the square were most of the executions in Paris took place. Here people were beheaded, quartered, cooked up or burned at the stake. In 1792, a guillotine was installed. It would prove itself useful during the French Revolution. The last execution took place in 1830, after which the square was renamed Place de l'Hôtel de Ville. The square was later enlarged to its current size by Baron Haussmann, as part of his modernization of Paris. In 1982 the large square became a pedestrian zone.

The Hôtel de Ville is situated in the 4th arrondissement, near the Seine River. It is not far from the Centre Pompidou (north) and the Notre-Dame Cathedral (south) across the pont d'Arcole. 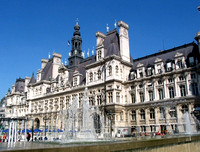