You couldn't possibly visit Paris without seeing the Eiffel Tower. Even if you do not want to visit it, you will see its top from all over Paris. It rises 300 meters tall (984 ft) and was twice as high as the Washington Monument, at the time the tallest structure in the world.

The Eiffel Tower was built for the World Exhibition in 1889, held in celebration of the French Revolution in 1789. The construction was only meant to last for the duration of the Exposition, but it still stands today, despite all protests from contemporary artists who feared the construction would be the advent of structures without 'individuality' and despite the many people who feared that this huge 'object' would not fit into the architecture of Paris. Today, there is no such aversion anymore among the Parisians and one could not imagine Paris without the Eiffel Tower, in fact it has become the symbol of the City of Light.

The man behind the Eiffel Tower was Gustave Eiffel, known from his revolutionary bridge building techniques, as employed in the great viaduct at Garabit in 1884. These techniques would form the basis for the construction of the Eiffel Tower. He was also known for the construction of the Statue of Liberty's iron framework. The structure took more than two years to complete. Each one of the about 12,000 iron pieces were designed separately to give them exactly the shape needed. All pieces were prefabricated and fit together using approx. 7 million rivets.

Inaugurated March 31, 1889, the Eiffel Tower would be the tallest structure in the world until the completion of the Chrysler Building in 1930. 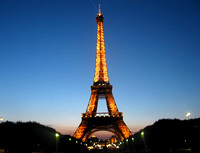 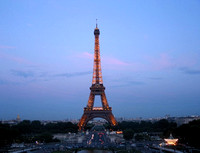