Visitors 0
Modified 19-Apr-19
Created 15-Sep-09
65 photos
The magnificent Château de Versailles is a testimony of the Sun King's extravaganza. The Palace and its magnificent formal garden became the quintessential model for palaces in Europe.

The town of Versailles sits about 20 kilometers outside of Paris. The first mention of the town and estate was in 1038, when the name appeared in a charter of the Abbey of Saint-Père de Chartres (1038). By the end of the 11th century, Versailles was a country village enveloping a castle and the church of Saint-Julien, remaining prosperous until well into the 13th century. After the Hundred Years War, however, only a handful of people lived there.

In the 16th century, the Gondi family became the rulers of Versailles and the town began to gain acclaim when future King Louis XIII visited and became enamored with the site. He purchased land in the area and proceeded to build a small brick and stone lodge there in 1622. Ten years later, he became the lord of Versailles and began enlarging his lodge. Soon, he purchased more land as well as Gondi’s estate. Louis XIII died in 1643. In 1662, the new king – Louis XIV – took an earnest interest in Versailles. Louis XIV, also known as The Sun King, distrusted the Parisians and wanted to move his Royal Residence away from the Louvre Palace, which was at the heart of constant political turbulence. The Sun King was largely responsible for the expansion that resulted in the building that still stands today. He hired architect Louis Le Vau along with artist Charles Le Brun to carry out the work on this Baroque masterpiece, which became the quintessential model for all palaces in Europe. Famed gardener André le Nôtre was responsible for the unequalled Versailles Garden. After Le Vau's death, Jules Hardouin- Mansart was commissioned to triple the size of the palace. Under his watchful eye, the northern and southern wings, the Orangerie, the Grand Trianon (a chateau) and the Royal Chapel were constructed. Later additions included the Opera and the Petit Trianon (a small chateau), which was built between the years 1761 – 1764 for Louis XV and Madame de Pompadour.

During the French Revolution, the incredible collection of paintings, antiques, and other works of art that had been amassed at Versailles were transferred to the Louvre and other important items went to the National Library and Conservatory of Arts and Crafts. Most of the furniture, historians say, was sold at auction.

After the Revolution, Napoleon spent his summers at Versailles until he abdicated. Later, it was Louis-Phillipe who, in 1830, transformed the chateau into a grand museum, dedicated to “the glory of France.” The Chapel, the Opera, and the Hall of Mirrors were preserved but many smaller apartments were destroyed to make room for spacious exhibition halls. In the 1960s, however, curator Pierre Verlet was responsible for getting some of the furnishings back and restoring a number of the royal apartments. Today, visitors to Versailles can visit much of the interior of this spectacular palace, as well as its world-famous garden.

Notable rooms include the Hall of Mirrors – some call this Louis XIV’s most notable contribution to Versailles. The main feature of the hall is the seventeen mirrored arches that reflect the seventeen arcaded windows which look out onto Versailles equally- magnificent garden. Each arch contains twenty-one mirrors, for a total of 357 in all. This magnificent hall measures 73 meters long, 10.5 meters wide, and 12.3 meters high (240x34x40ft). Statues and busts line the walls. The Hall of Mirrors has always played an important role in history including in 1919, as the First World War officially ended when Germany signed the Treaty of Versailles in this hall.

The current chapel of Versailles is the fifth at the palace. Construction began in 1689 and was completed around 1710. It features a “tribune” on the same level as the royal apartments, overlooking the nave, where the kings would sit when they attended mass. The architecture is a combination of Gothic and Baroque. Many of its features resemble cathedrals of medieval times, including the gargoyles and pointed roof, but other features are more reminiscent of the era in which it was built, including colored marble tile floors, columns, and carved pillars.

Originally known as the Apartment of the Planets (the 7 salons of this apartment each featured a painting of a planet), this was King Louis XIV’s apartment. While the entire apartment and all its salons are amazing, most notable are the ceilings, painted by Painter to the King, Charles Le Brun and his team of artists.

The auditorium of the Opera is fashioned entirely from wood, making it one of the most acoustically “live” theaters in the world. Though it was a court theater and not meant for a huge public audience, it seats more than 700. Gold, pink, and green dominate the decor for the Opera, which wasn’t constructed until 1770. It was first used for the wedding ball of future king Louis XVI and Marie Antoinette and boasts a unique mechanical system that raises the floor to the level of the stage. Today, it is still used for concerts and operas. 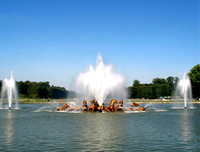 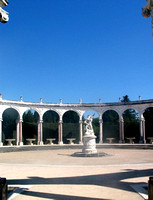 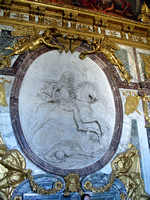 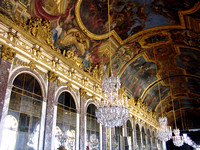 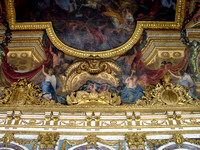 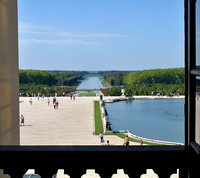 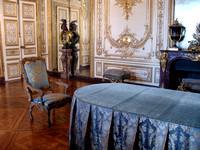 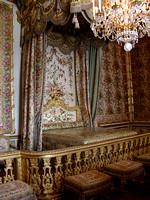 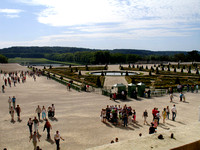