Visitors 0
Modified 19-Apr-19
Created 15-Sep-09
12 photos
At 8 hectares (20 acres), the octagonal Place de la Concorde is the largest square in Paris. It is situated between the Tuileries and the Champs-Elysées.

In 1763, a large statue of king Louis XV was erected at the site to celebrate the recovery of the king after a serious illness. The square surrounding the statue was created later, in 1772, by the architect Jacques-Ange Gabriel. It was known as the place Louis XV.

In 1792, during the French revolution, the statue was replaced by a another, large statue, called 'Liberté' (freedom) and the square was called Place de la Révolution. A guillotine was installed at the center of the square and in a time span of only a couple of years, 1119 people were beheaded here. Amongst them many famous people like King Louis XVI, Marie-Antionette, and the revolutionary Robespierre, just to name a few. After the revolution the square was renamed several times until 1830, when it was given the current name 'Place de la Concorde'.

In the 19th century the 3200 years old obelisk from the temple of Ramses II at Thebes was installed at the center of the Place de la Concorde. It is a 23 meters (75 ft) tall monolith in pink granite and weighs approximately 230 tons. In 1831, it was offered by the Viceroy of Egypt to Louis Philippe. Three obelisks were offered by the Viceroy, but only one was transported to Paris. The obelisk - sometimes dubbed 'L'aiguille de Cléopâtre' or Cleopatra's Needle - is covered with hieroglyphs picturing the reign of pharaohs Ramses II & Ramses III. Pictures on the pedestal describe the transportation to Paris and its installation at the square in 1836.

At each corner of the octagonal square is a statue representing a French city: Bordeaux, Brest, Lille, Lyon, Marseille, Nantes, Rouen and Strasbourg. They were installed in 1836 by Jacob Ignaz Hittorf, who redesigned the Place de la Concorde between 1833 and 1846. That same year a bronze fountain, called 'La fontaine des Mers' was added to the square. A second one, the 'Elevation of the Maritime' fountain, was installed in 1839. Both fountains were designed by Hittorf.

From the Place de la Concorde you can see the Arc de Triomphe (west), the Madeleine (north), the Tuileries (east) and, across the Seine, the Palais Bourbon, now the Assemblée Nationale(south). 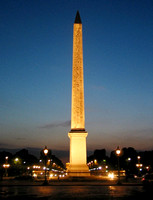 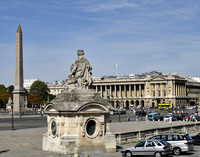