The park includes a zoo, a lake, a large fountain and several museums. The Catalan Parliament is seated at a building in the center of the park.

Catalan Parliament Building - The Citadel In 1714, after a 13 month long siege, Barcelona fell to the army of Philips V during the war of the Spanish Succession. In order to keep firm control over Barcelona, King Philips V built the largest fortress in Europe, a star-shaped citadel or 'Ciutadella'. A large part of the the Ribera district was demolished for this The lake fortress. Only 30 years later was the neighborhood rebuilt at another location as the 'Barceloneta'.

Ciutadella Demolishment - The much-hated symbol of central government was demolished between 1869 and 1878 after the Catalan general Prim handed over the citadel to the city. Only three buildings survived: the chapel, the Governor's palace and the arsenal, now home to the Catalan Parliament.

A New Park - Already in 1872 works to convert the area into a central city park had started, but it progressed slowly. In 1885 the park was designated as the site of the 1888 Universal Exhibition, giving a boost to the development of the park. Many buildings were constructed, several of which have survived. The 'Castel dels Tres Dragons' is the most notable of these. It is built as a medieval castle which served as a restaurant during the 1888 exhibition. It is now home to a museum, the Museo de Zoologia.

Some Attractions - Besides museums, the 30ha / 74acre large park is home to the Parc Zoologic, the Barcelona Zoo. The most famous of its 7000 animals was the albino gorilla, 'Floret de Neu'. Unfortunately, he died in 2004. The park also features a small lake, a popular spot where you can hire a rowing boat. There are several statues in the park, the ones that stands out most are a large stone mammoth and a metallic cat. A more conventional statue commemorates General Cascada Prim, who made the demolition of the citadel possible.

The Cascada - At the northern corner of the park is the Cascada, a triumphal arch with waterfall and fountain built for the 1888 Universal exhibition. The baroque construction designed by Josep Fontsère, responsible for the conversion of the citadel site into a park, took six years to complete. The design was loosely based on the Trevi Fountain in Rome. The architect was assisted by Antoni Gaudí, at the time still a student. 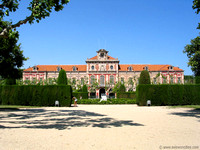 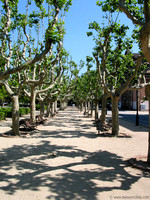 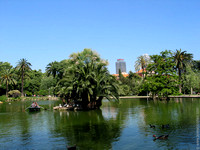 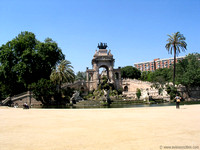 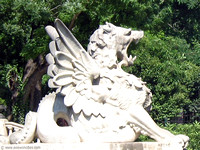 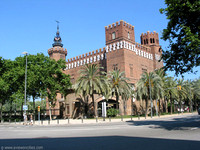