Construction of the opera building started in 1862, but it wasn't completed until 1875, partly because an underground lake was discovered during construction. The small lake still exists under the opera building. It was the hiding place of the 'Phantom of the Opera' in Paul Leroux's famous play.

Since the construction of the modern Opera de Paris Bastille in 1989, the majestic Opéra Garnier is now mainly used for ballet performances. It was also officially renamed 'Palais Opera'. Even though the opera has a seating capacity of less than 2,200, the building is one of the largest theatres in the world by acreage. It is 172 meter long, 125 meter wide and reaches a height of 73,6 meter (564 x 410 x 241 ft). The facade is decorated with rose marble columns, friezes, sculpture groups and two large gilded statues.

The interior of the Opéra Garnier building is even more impressive than its exterior. The marble Grand Staircase has a height of 30m/98ft! The 54m long Grand Foyer features a mosaic covered ceiling and a large number of chandeliers. It is so luxurious that it can be compared with the corridors in Versailles. Behind the Grand Foyer and below the green copper dome is the lavishly decorated auditorium with red velvet, plaster cherubs and gold leaf. The auditorium's magnificent chandelier weighs a massive six tonnes. Its large ceiling was painted in 1964 by Marc Chagall. The stage behind the auditorium is 60 meter high (197 ft) and has room for up to 450 actors.

The Opera de Paris Garnier is located at the Place de l'Opera, a square in the 9th arrondissement, just north of the 2nd arrondissement. 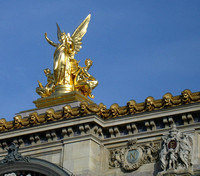 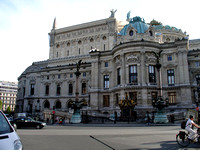 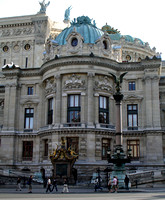