Visitors 0
Modified 19-Apr-19
Created 15-Sep-09
24 photos
In the middle of the Place Charles de Gaulle, at the border of the 8th, 16th and 17th arrondissement stands one of the greatest arches in history: the Arc de Triomphe (arch of triumph).

The arch was commissioned by Napoleon in 1806 to commemorate his victories, but he was ousted before the arch was completed. In fact, it wasn't completed until 1836 during the reign of Louis-Philippe. The Arc de Triomphe is engraved with names of generals who commanded French troops during Napoleon's regime.

The design of the arch by Jean Chalgrin is based on the Arch of Titus in Rome. The Arc de Triomphe is much higher (50m versus 15m), but it has exactly the same proportions. The triumphal arch is adorned with many reliefs, most of them commemorating the emperor's battles. Among them are the battle of Aboukir, Napoleons victory over the Turkish and the Battle of Austerliz, where Napoleon defeated the Austrians. The best known relief is the Departure of the Volunteers in 1792, also known as the Marseillaise. At the top of the arch are 30 shields, each of them bears the name of one of Napoleon's successful battles. The arch also includes the Grave of the Unknown Soldiers from the first World War.

The arch is located at the end of the Champs-Elysées, in the middle of the Place Charles de Gaulle, a large circular square from which no less than 12 streets emanate. The streets are named after French military leaders.

The top of the arch features a viewing platform from where you have great views of La Defense, the Champs-Elysées and the Sacré-Coeur. Make sure you take one of the underpasses to the arch, it is too dangerous to try and cross the street. There is no elevator in the arch, so be prepared to walk up 234 steps. 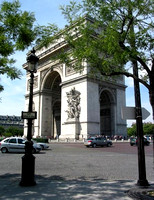 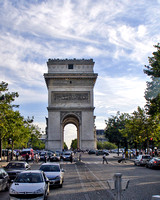 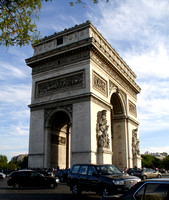 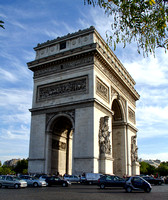 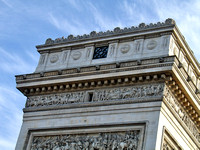 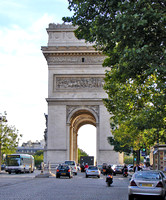 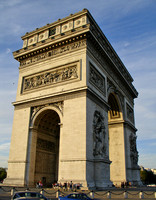 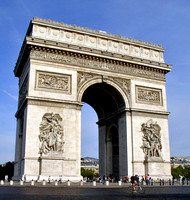