Visitors 0
Modified 19-Apr-19
Created 15-Sep-09
10 photos
The Jardin du Luxembourg is probably the most popular park in Paris. It is located in the 6th arrondissement, near the Sorbonne University.

The park, 22,45 hectare large (about 55 acres), was designed in 1612 in French style. In the 19th century, the private park was opened to the public. At the center of the park is an octagonal pond, known as the Grand Bassin. Here, children can rent small boat. Another attraction for children is the puppet theater. Around the pond are nice lawns and alleys, all laid out in a geometrical pattern. Numerous statues, including the Statue of Saint-Geneviève - patroness of Paris - adorn the park. This is also one of the parks where you can simply get hold of one of the many chairs and take it to the exact spot where you want to sit. The park is also popular with chess players and Jeux de Boules players.

Between 1615 and 1627 the Palais du Luxembourg (Luxembourg Palace) was constructed at the northern end of the Jardin du Luxembourg. It was built for Marie de Medicis, mother of Louis XIII. She was of Italian descent, so the architect, Salomon de Brosse designed the palace in a Florentine style. In 1794, during the French Revolution, the palace served as a prison. It also served as the headquarters of the Luftwaffe during the Second World War. The building currently houses the French Senate. 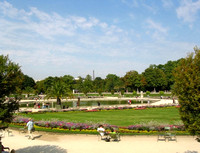