Visitors 1
Modified 9-Feb-19
Created 21-Sep-09
24 photos
Housed in one of London’s finest buildings, the British Museum is home to a vast collection of art and antiquities that span the millennia.

Established in 1753 with the donation of 71,000 objects from the collection of Sir Hans Sloane, the British Museum quickly became one of the city’s top attractions.

Since 1754, the museum’s home has sat at the site of the Montagu House in Bloomsbury. It wasn’t long before this facility became too small to display and store the museum’s huge collection and plans were made for additions to the museum. The Townley Gallery for classical sculpture was added first, but was later torn down to make way for the Smirke Building, which is the core of the building visitors see today when they visit the museum.

The idea for the Smirke Building, designed by Sir Robert Smirke in Greek revival style, was conceived in 1823 but the addition was not completed until nearly 30 years later. It was originally built to house the personal library of the father of King George IV. This new building was a quadrangle situated north of the Montagu House. The south wing of the Smirke Building eventually replaced the old house. A domed, circular reading room was added in 1857, and the White Wing, designed by architect John Taylor, was added 30 years later. King Edward VII’s Galleries, a beaux arts style addition, became part of the British Museum in 1914.

The Parthenon Galleries, by American John Russell Pope, was built to house the Parthenon sculptures and opened in 1939. However, because of extensive damage suffered during World War II, the structure had to be rebuilt and was reopened in 1962. Another new wing, opened in 1980, housed public facilities like a restaurant and gift shop.

The Queen Elizabeth II Great Court finally opened in 2000. This two-acre square (8000 sq m), enclosed by a glass roof, creates an indoor courtyard with the museum’s famed circular reading room in the center. This design made by Norman Foster and Partners makes it easier for visitors to find their way in the museum thanks to the large open space, very similar to the way the Easter Island Sculpture entrance area below the Louvre Pyramid in Paris works.

The collection found at the British Museum is enjoyed by millions each year. Because the museum is so large, many visitors take more than one day to explore. Not all of the more than 6 million artifacts are on display, but much of the collection constantly rotates so you'll see something new with each visit.

The Elgin Marbles, the collection of marble sculptures that were taken from the Parthenon in Athens, is one of the museum's most famous attractions. They are located in the purpose-built Parthenon Galleries. The sculptures, also known as the Parthenon Marbles, were obtained by Thomas Bruce, the 7th Earl of Elgin and diplomat in Constantinopal in the Ottoman Empire, which at that time included Greece. Earl Elgin obtained permission "to take away any pieces of stone with old inscriptions or figures thereon", to prevent any more damage by the Turkish. Lord Elgin's collection was at first displayed at his own house, but in 1816 the House of Commons decided to purchase the collection and hand it over to the British Museum.

Another highlight of the British Museum is the extensive Egyptian collection. Besides many sarcophagi and statues, including an enormous one of Pharaoh Ramesses II, the collection is home to the famous Rosetta stone, used by Jean-François Champollion to decipher the hieroglyphic writing. The text on the stone, created in 196 BC after the end of the Egyptian dynasties, is written in three different writings; Greek, hieroglyphic and demotic (a symplified form of hieroglyphic).

The British Museum is also known for its very large and popular collection of Egyptian mummies and coffins. You can even find animal mummies here.

The many other departments in the museum include Africa, Oceania, and the Americas; Sudan; Asia; Coins and Medals; Conservation, Documentation and Science; Greek and Roman Antiquities; the Middle East; Portable Antiquities and Treasure; Prehistory and Europe; and Prints and Drawings. 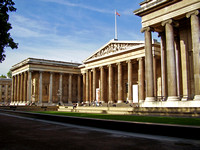 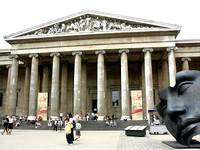 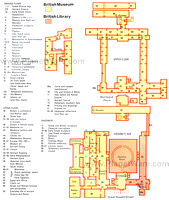 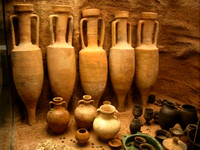 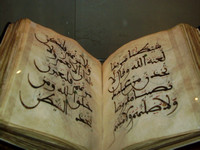 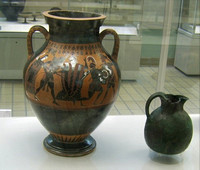 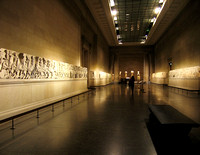 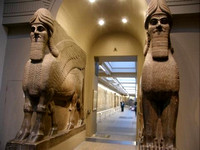