Visitors 5
Modified 18-May-11
Created 11-Apr-10
3 photos
Photography student Casey Gutteridge captured these extraordinary pictures at the Santago Rare Leopard Project in Hertfordshire, England. The 19–year-old, from Potters Bar, Hertfordshire, who was photographing the leopard for a course project, was astounded by the mouse's behaviour.

He said: “I have no idea where the mouse came from - he just appeared in the enclosure after the keeper had dropped in the meat for the leopard. He didn't take any notice of the leopard, just went straight over to the meat and started feeding himself. The leopard seemed pretty surprised - she bent down and sniffed the mouse and flinched a bit like she was scared. In the meantime the mouse just carried on eating like nothing had happened…but even a gentle shove did not deter the little creature from getting his fill. It was amazing, the keeper who had thrown the meat into the enclosure was shocked - he said he'd never seen anything like it before. Project owner Jackie James added: “It was so funny to see - Sheena batted the mouse a couple of times to try to get it away from her food but the determined little thing took no notice and just carried on.

Sheena was brought in to the Santago Rare Leopard Project from a UK zoo when she was just four months old. She is one of 14 big cats in the private collection started by Jackie’s late husband Peter in 1989. The African Leopard can be found in the continent's forests, grasslands, savannas, and rainforests. 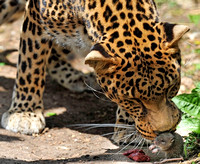 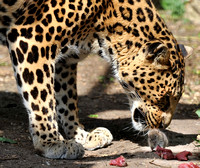