Visitors 0
Modified 9-Feb-19
Created 21-Sep-09
11 photos
Buckingham Palace, one of several palaces owned by the British Royal family, is one of the major tourist attractions in London.

The original building was constructed as a countryhouse in 1705 by the duke of Buckingham, John Sheffield. King George III bought the house in 1761 for his wife and had it altered by William Chambers. In 1826, King George IV asked famed architect John Nash to expand the house - then known as Buckingham House - into a palace. King George IV as well as his younger brother and successor King William IV both died before the palace was seen from completed.

Queen Victoria was the first to reside in the palace. In July 1837, three weeks after her accession to the throne, she moved from Kensington Palace, where she grew up, to the new Buckingham Palace. The palace was expanded in 1850, when the large east wing was added. The wing includes a large 40 meter (131 ft) long ballroom. The monumental façade which can be seen from the Mall was built in 1913 by Aston Webb.

A part of the palace is still used by the Royal family. A flag is hoisted each time the Queen is in the Palace. Other parts of the palace can be visited, including the lavishly decorated state rooms.

Buckingham Palace is located in Westminster, at the end of the Mall. It is bordered by Green Park in the north and by St. James's Park in the east. The statue in front of the Palace is the Queen Victoria Memorial. 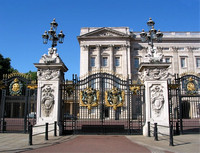 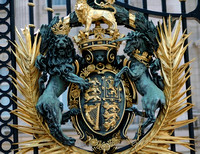 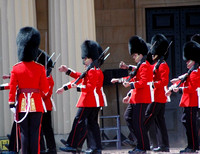 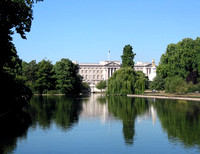