Visitors 1
Modified 9-Feb-19
Created 22-Sep-09
40 photos
The Westminster Abbey, located near the Houses of Parliament, is more a historical site than a religious site.

Since 1066, every royal coronation, with the exception of Edward V and Edward VIII has taken place in Westminster Abbey. The abbey also serves as the burial ground for numerous politicians, sovereigns and Westminster Abbey artists. The abbey is stuffed with graves, statues and monuments. Many coffins even stand upright due to the lack of space. In total approximately 3300 people are buried in the Church and cloisters. Some of the most famous are Charles Darwin, Sir Isaac Newton and David Livingstone.

The history of the abbey starts in 1050, when King Edward The Confessor decided to build an abbey. Only a small part of this original Norman monastery, consecrated in 1065, survived. The only representation of this original building is shown on the Bayeux Tapestry. Most of the present building dates from 1245 to 1272 when Henry III decided to rebuild the abbey in the gothic style. Large parts were later added: the Chapel of Henry VII was added between 1503 and 1512, while the two West Front Towers date from 1745. The youngest part of the abbey is the North entrance, completed in the 19th century.

The abbey’s nave is England’s highest. In the nave you find the Grave of the Unknown Warrior, a World War I soldier who died on the battlefields in France and was buried here in French(!) soil. Nearby is a marble memorial stone for Winston Churchill. His body is not, like many fellow prime ministers, buried in the abbey, but in Bladon.
The Cloyster were built between the 13th and 15th century. They were completely rebuilt after the Great Fire of 1298. The cloyster were used by the monks for meditation and exercise.
The beautiful octagonal Chapter house is one of the largest of its kind in England. It has an original tile floor dating from 1250 and 14th century murals.

The Henry VII Chapel (aka Lady Chapel), built 1503-1512, is one of the most outstanding chapels of its time, with a magnificent vault. It features a large stained glass window, the Battle of Britain memorial window. The window, which dates from 1947, commemorates fighter pilots and crew who died during the Battle of Britain in 1940. 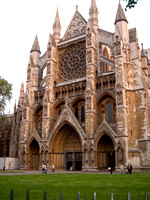 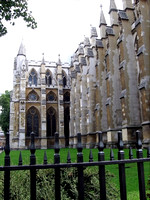 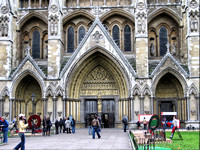 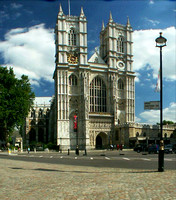 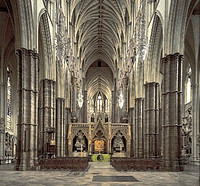 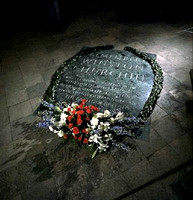 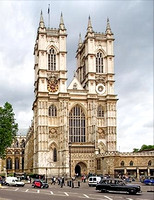 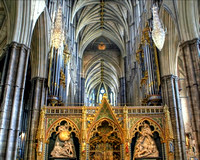 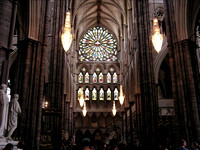 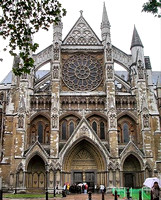 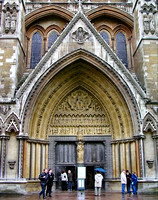