Visitors 0
Modified 9-Feb-19
Created 21-Sep-09
4 photos
The Clock Tower of the Palace of Westminster, known as the Big Ben, is one of London's most famous landmarks.

"The Clock Tower of the Palace of Westminster is commonly referred to as the 'Big Ben', but in fact the name Big Ben refers to the clock's hour bell, the largest of the clock's five bells, the others being used as quarter bells. There were two bells cast as the clock tower's hour bell. A first, a 16 ton weighing bell was cast by John Warner and Sons in 1856. Since the Clock Tower was not yet completed, the bell was hung temporarily in the Palace Yard. The bell soon cracked so it was recast in 1858 in the Whitechapel Bell Foundry as a 13.5 ton bell. Unfortunately soon after this bell was placed in the belfry in July 1859, it cracked yet again. This time, instead of recasting the bell, the crack was repaired and a lighter hammer was used to prevent any more cracks. The hour bell was probably named after Benjamin Hall, the first commissioner of works. Some sources, however, claim the bell was named after Benjamin Caunt, a British heavyweight boxing champion.

The clock was the largest in the world and still the largest in Great-Britain. The clockfaces have a diameter of almost 25ft (7.5m). The hour hand is 9ft or 2.7m long and the minute hand is 14ft (4.25m) long. The clock is known for its reliability, it has rarely failed during its long life span. Even after the nearby House of Commons was destroyed by bombing during World War II, the clock kept on chiming. The clock's mechanism, designed by Edmund Beckett Denison, has a remarkable accuracy. The clock's rate is adjusted by simply adding small pennies on the shoulder of the pendulum.

The tower was constructed between 1843 and 1858 as the clock tower of the Palace of Westminster, now better known as the Houses of Parliament. The clock tower is 316ft high (96m) and consists of a 200ft high brick shaft topped by a cast iron framed spire. The clockfaces are 180ft / 55m above ground level.

Unfortunately the clock tower is not publicly accessible, but if you're looking for views over London. the London Eye is currently the best option. 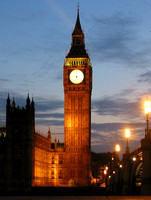