Visitors 0
Modified 9-Feb-19
Created 22-Sep-09
7 photos
The majestic St. Paul's Cathedral was built by Christofer Wren between 1675 and 1711. It has the largest dome in the world after the St. Peter's Basilica in Rome.

St. Paul's Cathedral has had an eventful history. The first records date from 604 AD, when Mellitus, Bishop of the East Saxons built the first wooden church on the summit of one of London's hills. At the end of the 7th century, it was built in stone by Erkenwald, Bishop of London. In 962 and 1087, the Cathedral was destroyed by fires, but each time it was rebuilt. By that time, it was one of the largest cathedrals in Europe.

Re-buildings and extensions in the 13th and 14th century enlarged the cathedral even more. But disaster struck again on the night of the 2nd of September 1666, when the great fire of London destroyed 4/5th of all of London, wiping 13,200 houses and 89 churches, including the St. Paul's Cathedral off the map.

In 1669, Christopher Wren designed the so-called 'Great Model' for the new St. Paul's Cathedral. In this model, the cathedral was shaped like a Greek cross, with a portico, consisting of Corinthian columns, on the entrance. The model was topped by a striking large dome, the largest in the world after Michelangelo's dome of the St. Peter's Basilica in Rome. The design was approved in 1675, but it took until 1711 before the Cathedral was finally finished. 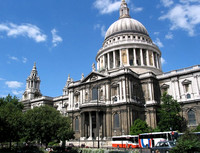