Visitors 1
Modified 26-Dec-22
Created 18-Aug-20
32 photos
Local man Ho Khanh discovered Son Doong in 1990 while searching Phong Nha-Ke Bang National Park for food and timber to earn a modest income. During his search he stumbled across an opening in a limestone cliff, noticed clouds billowing out from the entrance and heard the sounds of a river raging from somewhere inside. He returned home and forgot about the cave.
Ho Khanh met Howard and Deb Limbert of the British Cave Research Association (BRCA), who were conducting exploratory caving expeditions in the area. After hearing his stories, they urged Ho Khanh to rediscover the cave, which he eventually did in 2008, after several attempts. In 2009, he led Howard, Deb and a team of other caving professionals to the opening. After the first survey in 2009, the team were able to conclude that the cave had the largest cross-section of any cave anywhere on the planet.
The cave was named “Son Doong”
Son Doong is relatively young – about 3 million years old in a limestone area dating back 400 million years. The mighty Rao Thuong River carved out Son Doong as it eroded away the limestone, forming an enormous tunnel beneath the Truong Son Mountains. The large dolines (or skylights) collapsed sometime in the last 500,000 years, creating massive openings to the outside world. Cave pearls the size of baseballs and stalagmites the size of tall buildings have formed from water dripping from the cave ceiling.
The first expedition was halted by a 90m high calcite barrier, which was jokingly dubbed the “Great Wall Of Vietnam.” It wasn’t until the second expedition in 2010, when the Great Wall was finally climbed and the end of the cave was found. The main huge passage is over 5km long with sections reaching up to 200m tall and 150m wide. Son Doong is large enough to house an entire 40-story New York City block skyscraper.
Cave experts are researching the connection between Son Doong Cave and neighbouring Thung Cave. If the connection is made , Son Doong will be the largest cave in the world by volume, as well as cross-section. 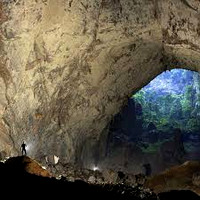 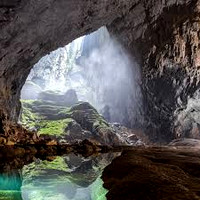 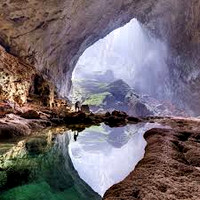