Visitors 2
Modified 19-Apr-19
Created 31-May-11
25 photos
Dolmabahçe Palace in Istanbul, Turkey, is located on the European side of Bosporus and was the main administrative center of the Ottoman Empire. Dolmabahçe is the largest of the Ottoman imperial palaces. It's huge and sumptuous, with 285 rooms, 43 large rooms, and many other specialized areas. The design and decoration of the palace reflects the growing influence of European styles and standards of the Ottoman culture.
The construction cost five million Mecidiye (Ottoman gold coin) was the equivalent of 35 tons of gold. Fourteen of those tons of gold were used to gild the ceilings of the 45,000 square foot palace.

Dolmabahçe has one of the largest collections of Bohemian style lamps and Baccarat in the world. In the Hall of Ceremonies, the chandelier of Bohemia Crystal is the world's largest. It weighs 4.5 tons and has 750 lights. It was a gift from Queen Victoria. The famous central staircase was built of Baccarat crystal, brass and mahogany.

A law that took effect on March 3, 1924 transferred ownership of the palace to the National Heritage division of the government of the New Republic of Turkey. 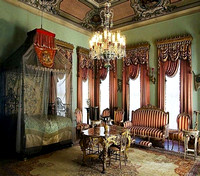 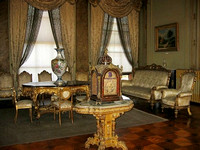