Galleries 3
Collections 0
Groups 0
Created 17-Sep-09
Modified 19-Apr-19
Le Mont-Saint-Michel is a rocky tidal island and a commune in Normandy, France. It is located approximately one kilometre off the country's north coast, at the mouth of the Couesnon River near Avranches. The population of the island is 50.

Le Mont-Saint-Michel was previously connected to the mainland via a thin natural land bridge, which before modernization was covered at high tide and revealed at low tide. This has been compromised by several developments. Over the centuries, the coastal flats have been polderised to create pasture. Thus the distance between the shore and the south coast of Mont-Saint-Michel has decreased. The Couesnon River has been canalised, reducing the flow of water and thereby encouraging a silting-up of the bay.

In 1879, the land bridge was fortified into a true causeway. This prevented the tide from scouring the silt round the mount. On 16 June 2006, the French prime minister and regional authorities announced a €164 million project (Projet Mont-Saint-Michel[1]) to build a hydraulic dam that will help remove the accumulated silt and make Mont-Saint-Michel an island again. It is expected to be completed by 2012.

William de Volpiano, the Italian architect who had built the Abbey of Fécamp in Normandy, was chosen as building contractor by Richard II of Normandy in the 11th century. He designed the Romanesque church of the abbey, daringly placing the transept crossing at the top of the mount. Many underground crypts and chapels had to be built to compensate for this weight; these formed the basis for the supportive upward structure that can be seen today.
Today Mont-Saint-Michel is seen as a Gothic-style church. Robert de Thorigny, a great supporter of Henry II of England (who was also Duke of Normandy), reinforced the structure of the buildings and built the main façade of the church in the 12th century.

In 1204 the Breton Guy de Thouars, allied to the King of France, undertook the siege of the Mount. After having set fire to the village and having massacred the population, he was obliged to beat a retreat under the powerful walls of the Abbey. Unfortunately, the fire which he himself lit extended to the buildings, and the roofs fell prey to the flames.

Horrified by the cruelty and the exactions of his Breton ally, Philip Augustus offered Abbot Jourdain a grant for the construction of a new Gothic-style architectural set which included the addition of the refectory and cloister. Charles VI is credited with adding major fortifications to the abbey-mount, building towers, successive courtyards and strengthening the ramparts. 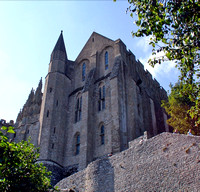