Galleries 4
Collections 0
Groups 1
Created 17-Sep-09
Modified 19-Apr-19
The Loire Valley is known as the Garden of France and the Cradle of the French Language. It is also noteworthy for the quality of its architectural heritage, in its historic towns such as Amboise but in particular for its world-famous castles, such as the Châteaux d'Amboise, Château de Chambord, Chenonceau and more particularly its many cultural monuments, which illustrate to an exceptional degree the ideals of the Renaissance and the Age of the Enlightenment on western European thought and design.

On December 2, 2000, UNESCO added the central part of the Loire River valley to its list of World Heritage Sites. The committee said that the Loire Valley is: "an exceptional cultural landscape, of great beauty, comprised of historic cities and villages, great architectural monuments - the Châteaux - and lands that have been cultivated and shaped by centuries of interaction between local populations and their physical environment, in particular the Loire itself.

The châteaux, numbering more than three hundred, represent a nation of builders starting with the necessary castle fortifications in the 10th century to the splendor of those built half a millennium later. When the French kings began constructing their huge châteaux here, the nobility, not wanting or even daring to be far from the seat of power, followed suit. Their presence in the lush, fertile valley began attracting the very best landscape designers.

By the middle of the 16th century, King Francois I, had shifted the center of power in France from the Loire back to the ancient capital of Paris. With him went the great architects, but the Loire Valley continued to be the place where most of the French royalty preferred to spend the bulk of their time. The ascension of King Louis XIV in the middle of the 17th century made Paris the permanent site for great royal châteaux when he built the Palace of Versailles. Nonetheless, those who gained the king's favour and the wealthy bourgeoisie, continued to renovate existing châteaux or build lavish new ones as their summer residence in the Loire.

The French Revolution saw a number of the great French châteaux destroyed and many ransacked, their treasures stolen. The overnight impoverishment of many of the deposed nobility, usually after one of its members lost their head to the guillotine, saw many châteaux demolished.

During World War I and World War II, some chateaux were commandeered as military headquarters. Some of these continued to be used this way after the end of WWII. Today, these privately owned châteaux serve as homes, a few open their doors to tourist visits, while others are operated as hotels or bed and breakfasts. Many have been taken over by a local government authority or the giant structures like those at Chambord are owned and operated by the national government and are major tourist sites, attracting hundreds of thousands of visitors each year. 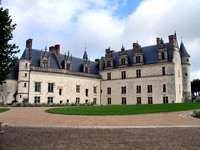 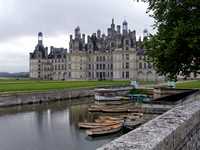